This time of year often means different things to different people. Tax day has come and gone. The cherry blossoms are waning. For some, the coming of summer means skinterns and rooftop bars, for others sundresses and espadrilles, and for an unlucky few months of shellacking yet another coat of antiperspirant mid-afternoon. However, for most bartenders in the area it means one thing: Mojito Season. Ask any bartender and they’ll tell you the mojito is the reigning champ of “Most Hated Drink to Make” — Time consuming, labor intensive, and, goddamnit, popular.

There may be other drinks out there that register more disdain when ordered than a mojito, but few that elicit that audible groan from the man behind the stick. Few that will cause bartenders to lie to their guests at 11:30pm “Oh, I wish I could…I’m all out of mint” as the Tupperware overflows with vibrant, green, pre-picked leaves just out of sight. Rising like a phoenix from the ashes of winter the mojito season is upon us once again.

Strangely enough, for a drink that no bartender ever claims to love to make each and every one seems to have very strong opinions on how it should be made. Like chili or barbeque for Texans, telling a fellow bartender how they should make a mojito is akin to pissing in their grandma’s grapenuts. With that said, go find grandma…

Perhaps you have no idea what I’m talking about. Perhaps you don’t care about mojitos. Perhaps you don’t think you have an opinion or care about the drink at all…oh but you do. For example: what glass does it go in? Rocks? Collins? Pint? How much mint? How much lime? Can you use lime juice? Or must it be whole slices? What kind of sweetener is appropriate? Should you use granulated sugar or simple syrup? What kind of sugar? White? Brown? Splenda? Turbinado? Can you use a mint syrup and exclude the mint leaves all together? Is it muddled? Or can you just shake it all together and let the ice bruise the lime and mint? Then what kind of rum? Light? Dark? Gold? Spiced? What about a rhum agricole? Then do you top it with club soda or is lemon lime soda acceptable? Garnish? Chances are you went through that litany of questions picked out your methodology and thought “duh!” Any other option elicited a “What fucking idiot would do that!”

But we’re getting ahead of ourselves. Before we can answer that makes a good mojito, we should probably examine what a mojito is and is not. Unfortunately, it’s easier said than done.

It’s generally agreed upon that a mojito is a combination of lime, mint, sweetener, r(h)um and sometimes but not always carbonation. However after that people can’t agree on much else.

The Muddled History of Mojitos

The mojito has its roots in Cuba (or at least the Caribbean). Originally called El Draque, it dates back to the 1500s. Maybe you could consider El Draque the great, great, granpappy of the mojito. A crude precursor of rum was combined with lime, sugar, and mint to mask the harsh flavors from poor alcohol production methods. It was served without ice or carbonation. Hardly a mojito by today’s standards but maybe the Cro-Magnon man to our Homo Sapien. From there it was refined and redefined as ice and carbonated beverages became accessible in the mid 1800s. Although, that’s all a little too linear for my tastes. It’s doubtful that someone woke up one morning with a eureka moment: “Aha! I shall call it a mojito.” I mean, similar drinks already existed. Some could argue that the mojito is the love child (or missing link) between a mint julep and a caipirinha. Or maybe it’s a rum smash with some citrus? Or a daiquiri with some mint? Shockingly, original mint julip recipes called for rum—it’s not a far leap to put a splash of lime in there as well. While the history of the mojito (and I can’t resist) is muddled, it’s safe to say wherever it comes from it’s been around for quite a while.

So why does it feel like it just arrived on the scene? A little more than a decade ago it was on nary a cocktail list (although, to be fair, a little more than a decade ago few bars had a cocktail list). Nevertheless, it’s now one of the holy triad of bar school drinks: cosmos, mojitos, lemondrops oh my! It’s hard to say exactly why. Call it the slow food (err…slow drink) movement; maybe it was the shift to fresh ingredients in drinks in the mid 90’s. The sheer amount of time it has been with us lends itself to evolution and re-definition which explains why there are so many interpretations as to what this drink really is—and, consequently, why it’s difficult to pin down it’s lineage. Regardless of where the mojito comes from or why it found its way back into the barroom, one thing is clear: the mojito is back and in a big way. So let’s roll up our sleeves, play nice, and figure out how to make the mojito work for us.

Before we begin, we’ve really got to get a couple things straight. In my book, these are deal breakers. Get it right.  After all warm weather is Mojito Season. But let me explain:

1) The mojito should be served in a tall glass. Collins, pint, take your pick, but far too many bars and bartenders have taken to serving this drink in a rocks glass. Don’t get me wrong, I understand why. Both bars and bartenders are under constant pressure from guests to “Make it strong” while trying to maintain a healthy profit margin. Answer? Put it in a smaller glass. Unfortunately, there is too much stuff/garbage (mint, lime, sugar, rum, ice, soda) in this drink for a rocks glass to handle. The other aspect to keep in mind is the point of the drink: it’s a summertime cooler. Period. Sure, some order it in the dead of winter just to remember what color, freshness, and life look like…but the drink’s real purpose is avoid that third application of deodorant when the thermostat tops 104°. Point being: make it tall or go home. 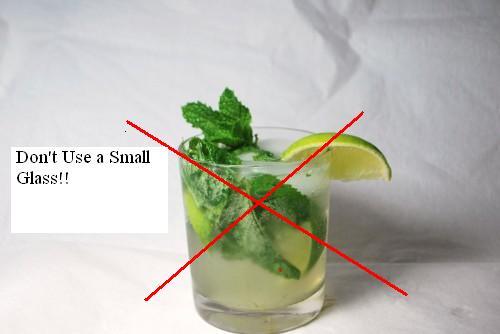 I’m not saying that the recently released Bacardi Mojito Mixer, or mint and lime that’s been macerated in rum, or even shaking the rum, limes, mint, and ice together hoping the ice will bruise it sufficiently doesn’t have its place (usually on keg buses, at large house parties, and when the bartender is just plain lazy/ doesn’t like you). Nevertheless, muddling this drink brings a sort of je ne no sais quoi to the equation. Muddling not only extracts the juice of the lime but also the essential oils stored in the skin (when we think of the flavor of citrus fruits 95% is concentrated in the peel). Muddling breaks the cellular walls in the mint releasing all that minty goodness.

Moreover, when this drink is muddled it’s as if the consumer can actually taste the bartender’s love (okay, that sounds gross…passion?…even worse…effort?…better but not by much). It’s as if the pain, sweat, tears, and hatred of making this drink is translated into the final product. So once again, I apologize, but it’s got to be muddled. Suck it up.

With those basic tenants in place we headed to our bartending school test kitchen (READ: my kitchen) and experimented with countless recipes and variations (no, really, we even tried a Rose’s Lime Juice, Crème de Menthe and rum concoction that one bartender swore worked—not surprisingly it didn’t) and put the most successful outcomes out to be judged by a panel (READ: fellow alcoholics) in a blind taste test.

By popular vote, the winner is:

Approximately 8 mint leaves (mint leaf sizes vary but we found that a three finger pinch usually provided us with around 8 leaves. So it’s not like you have to count them out or anything. But make sure it’s just the leaf…the stalks of mint are bitter and if they make it in the glass you’ll have a bitter drink. The general idea is you want the drink minty but you don’t want your guests chewing the drink)

1 Teaspoon of superfine turbinado sugar (turbinado sugar AKA “sugar in the raw” does not come in superfine so put the sugar in a food processer (a coffee grinder works well or even a plastic bag and a hammer would work) because you’ll need smaller “grains”. Sugar does not readily dissolve in cold liquids and the bulkier grains of turbinado sugar ultimately makes for a pretty gritty drink. Spend some prep-time to pre-grind the sugar so the final product doesn’t come out a crunchy mess.)

Muddle (now, there are lots of ways to muddle, but basically push down and twist and repeat and repeat. You’ll want to muddle this until the skin of the lime starts to rip off the meat a bit. Try not to shred the mint. Putting the lime and sugar on top of the mint should help prevent that.

Add ice and Rum (as for the rum it’s a personal taste issue; however, the vegetal notes of a rhum agricole work nicely. We used a 4 year Barbancourt from Haiti.)

This was the Mojito people seemed to like the most. Full Disclosure: no one could explain “why” they liked this one the best, they just did. My best guess is the combination of the rhum and the turbinado sugar (while slightly affecting the color) gives the drink a certain deliciousness that people can’t necessarily verbalize but all the same find appealing.

Admittedly, this is a pretty classical approach to a mojito with maybe a twist or two (the sugar thing worked out great, but I’ll cop to the lemon-lime soda being a bit douchy). However, in our research and experimentation (READ: boozing) we were exposed to some interesting and inventive variations. While I tend to be a bit of a purest when it comes to drinks, by far the best non-mojito mojito was found at Cedar in Chinatown (822 E ST, NW, Washington DC). Christened the “Dirty Mojito” by bar manager Matt Perkins; it’s similar to a mojito but instead it combines lemon, mint, honey, and Irish Whiskey. Anyone who thinks “whiskey tastes nasty” will be turned out by this badass mash-up. Next time you’re in Chinatown check it out. Trust me.

What I like about Matt’s “Dirty Mojito” and the mojito in general is that it’s a sneaky drink for both the customer and the bartender. For as trite as it may be at this point, the mojito acts like a gateway drink into the world of classic cocktails. This drink requires the bartender to employ some advanced techniques, equipment, and fresh ingredients. As for the customers, it gets them away from the standard vodka & tonic (if only for a round or two), and it gets them to try something perhaps outside of their comfort zone. Variety is the spice of life and all that. Now I need a drink.